We are not the first team in the world making an attempt on air-breathing electric propulsion (ABEP). Our approach is different – rather than building our ABEP solution based on an existing (typically Xenon) thruster, we are developing a disruptively new source of ionization. What we expect from this new technology is especially:

The pressure of the residual atmosphere at VLEO is extremely low, typically in the order of 10-4 P, which is low but still much more than the cold vacuum of LEO or GEO. We use validated simulation tools to understand the effect of gas flow on the spacecraft at VLEO. With these tools, we can get a good grasp of such effects as drag, gas compression, spacecraft rotation. 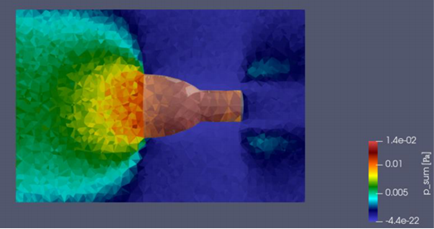 We also have a solid theoretical background in plasma science. Ionizing oxygen, let alone in a mixture with other gases, is much more challenging than xenon or other rare gases – even for a simple O/N2/O2/N mixture, there are about various plasma reactions that have to be factored in. Our team has experts in plasma simulation and plasma dynamics who are running numerical simulations of plasmas in VLEO-air. We design our plasma source based on these simulations.

For a time, this work has been mostly theoretical but we are happy to announce that the second prototype of SpaceLabEU’s ABEP ionization source is now up and running. At the moment, we are running tests on it but it seems to meet all the performance requirements.

Theme by Anders Noren — Up ↑